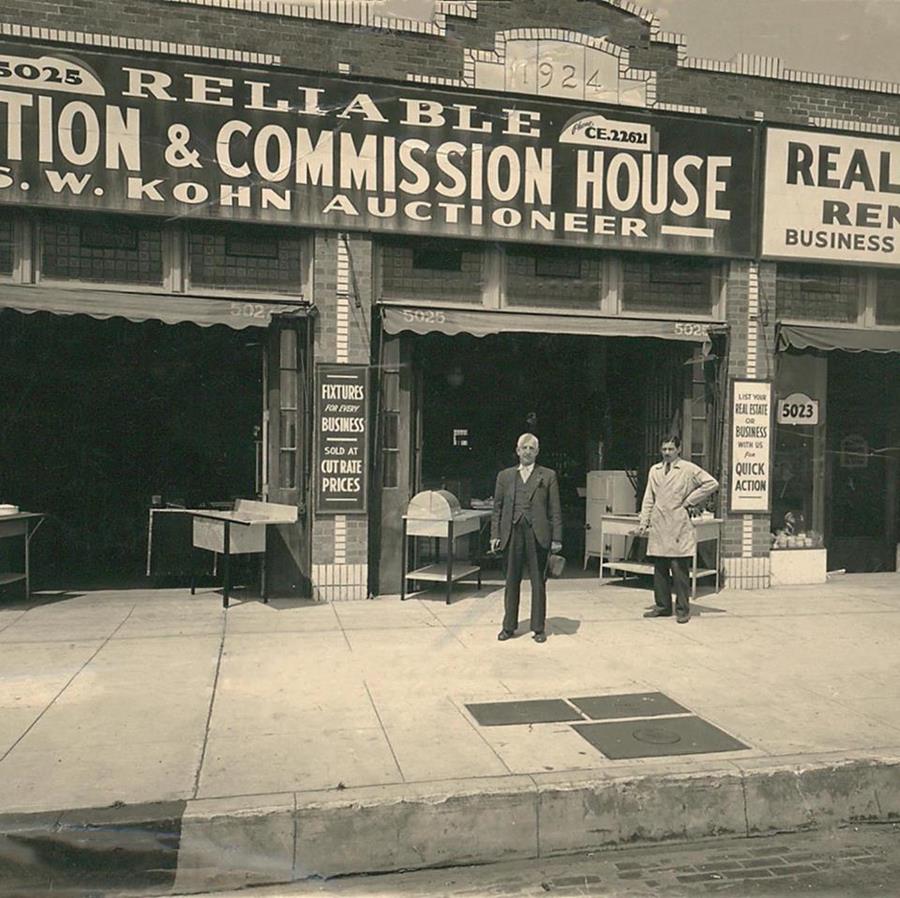 Kohn-Megibow Company was founded in 1916 by S.W. Kohn.  He was the first auctioneer in Southern California to specialize in selling restaurant equipment at auction.  In 1924, he moved into a building he built at 5025 S. Figueroa, which still stands.  The building was named the Sylvia and Rose building after his two daughters.  In 1947 after returning from World War II, Sylvia’s new husband, Sol Megibow, joined his father-in-law in business and Kohn-Megibow Company got the name it bears today.

This duo operated an auction company specializing in selling restaurants, bakeries and markets at auction in Southern California until Mr. Kohn’s passing in 1956.  The company continued at the direction of Mr. Megibow until he was joined by his son-in-law Stephen Grove in 1973.  In the mid 1960’s, Mr. Megibow rented a small warehouse and would buy failed restaurants and move the equipment into the warehouse where it would be sold at auction.  He was the first to do this on a regular basis in California.

In 1980, at the direction of Stephen Grove, Kohn-Megibow Company purchased a 20,000 square foot warehouse in an industrial section of Los Angeles that allowed the company to continue its growth.  By 1990, that growth compelled the company to buy a 40,000 square foot building in a much nicer section of Anaheim, California.  About that time, Mark Alderson and Sherrie Gailey joined Stephen Grove in the management of the company.

Today, Kohn-Megibow Company moves on the average of more than one whole restaurant/bakery/market every day.  With such volume and using economies of scale, Kohn-Megibow can sell good used quality equipment cheaper than anyone in California.  For the past ten years, new equipment has also been sold at discount prices, as well as hood and walk-in installations.

There is no better place to buy a combination of new and used equipment in California than at Kohn-Megibow Company, located at 1341 N. Kraemer Blvd., Anaheim, California. Our facility is large, clean and staffed with many years of experience.

Experience a Restaurant Auction at Kohn-Megibow